Posted by this Hoffen: The Ghost of Jerry Reed on Monday, January 05, 2015 No comments:

Posted by this Hoffen: The Ghost of Jerry Reed on Monday, December 15, 2014 No comments:

Posted by this Hoffen: The Ghost of Jerry Reed on Monday, November 24, 2014 No comments:

Posted by this Hoffen: The Ghost of Jerry Reed on Tuesday, October 28, 2014 No comments:

Posted by this Hoffen: The Ghost of Jerry Reed on Monday, October 13, 2014 No comments: 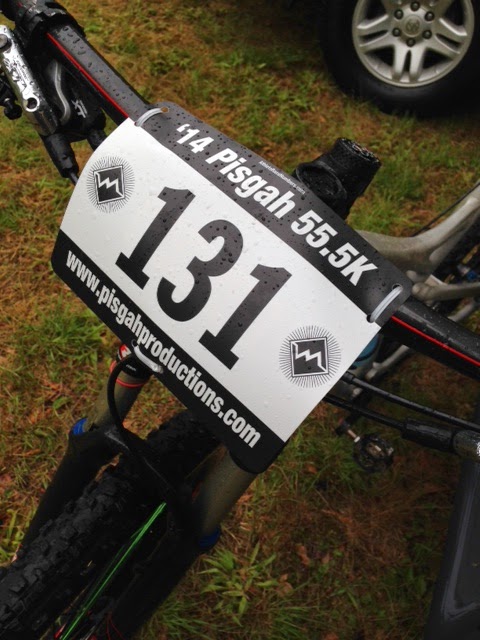 Pisgah can be a monster. A monster that hides in the dark under your bed and snatches your legs out from under you just when you're just about to get in your nice warm cozy bed. It can pull you under tossing your body like a sneaker in a washing machine, it fucks with your mind, and it eats bike parts like a bowl of M&Ms.

The day before the 55, the a small crew of misfits decided to put in some trail time out at Dupont. About 27miles of trail time. It was all good. I had planned on riding something to try and remember how to ride a mountain bike anyway. The only slight issue was when I decided to launch myself over the handlebars at about 20-25mph (according to my best estimate via my Garmin). I cant really recall what exactly happened. All I know I took a pretty good hit to the head (thank you helmet) and somehow got twisted inside my bike unable to move (thank you Ian for helping me get out). I seemed to be ok, just typical scrapes, bumps and bruises and a bit dizzy. Fast forward toward the end of the ride an my head was pounding! Like every time I hit a rock/root it felt like my eyeballs were going to explode out my head pounding. A little rest/recovery, a 32oz Dos Equis, an Advil or four and be fine for the next day, right?

Now I've only ridden about 40% of the 55 course. Yes, I know... I lived in Asheville and did not ride some of the best known trails. Shame on me, yea yea. Moving on.

The main challenge was riding the unfamiliar trails. Another challenge was overcoming not really being able to look to the left, pedal hard with my right leg or generally convince myself that my body didn't feel like a white knuckle clenched fist. Oh, lets not forget the rain. Seems like every damn time I visit AVL it freaking rains! Sorry folks. If Kyle's coming to town better break out the rain jackets (or at least it rained on the Ranger District side of the mtn).

It was not my best day. I felt like ass. I rode like ass. Just generally unable to get my rhythm going and making stupid mistake after stupid mistake. All those stupid mistakes completely killed what little mojo I had. Surprisingly though, the only sections I felt good about were the ones I was most intimidated by, Pilot Rock and Black Mt. DH. I've been up both those trails so I knew what was in store for on the way down. I cleaned, lets call it 90% of Pilot and all of Black which was significantly more than I had expected to. Some sections even feeling fast. Its the little victories...

It was a rough day. I bit off slightly more than I could chew. I had a lot going on in my head. My body didn't want to help me out. I consider it a win when you test yourself, push what you think you are capable of, whatever that may be, and come out the other side. I'm still checking this off as a W in my book. One of those things when you feel happy that you finished. 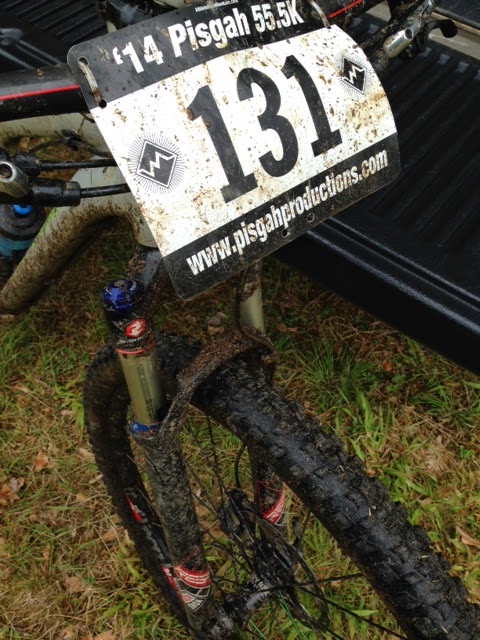 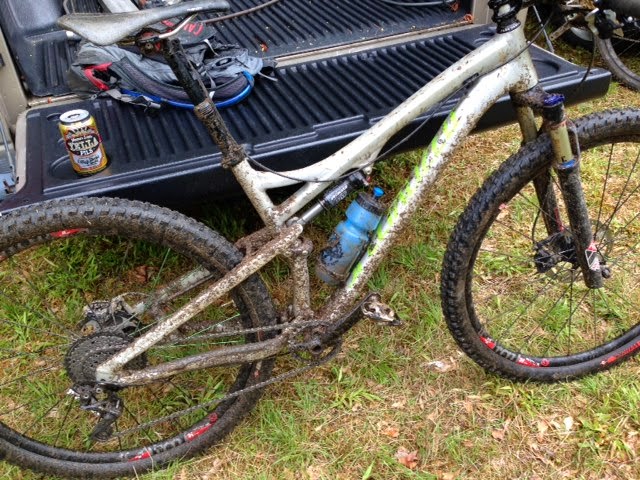 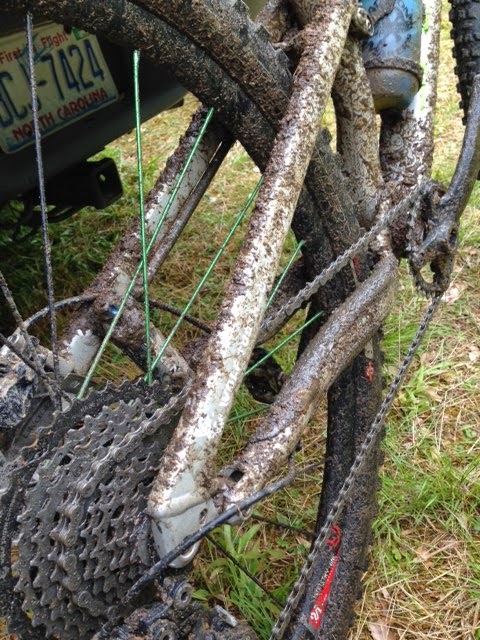 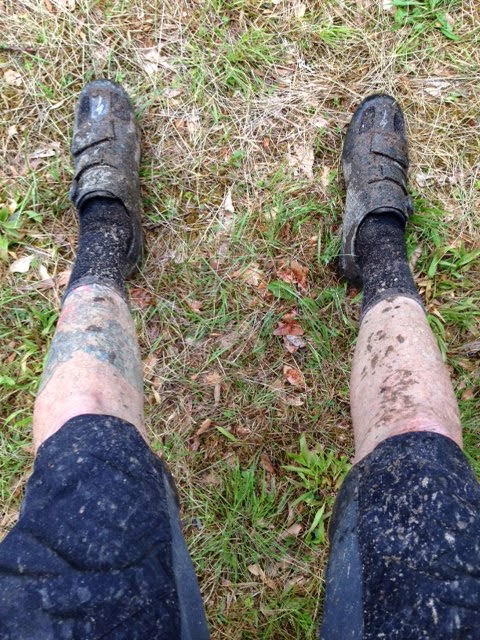 Dad's birthday was this past Friday. He was on my mind a lot. I miss him. I don't say that enough. A part of me felt like he was there, pushing me when I was at my lowest. It really is a unique feeling like someone who isn't physically with you anymore has your back and is pushing you. Thanks Dad, I miss you. Happy Birthday.
Posted by this Hoffen: McNasty on Monday, May 19, 2014 No comments:

I've never used the term "training". I don't think I ever will. Riding a bike is something I view as a simple thing. It's fun, it should make you happy. If you're feeling good, ride hard. If you feel like shit, don't, go have some beers. This ideal may have me being a perpetual mediocre bike racer and I'm cool with that. Of course I'm a competitive person and I want to do the best I can when it comes to racing and I also enjoy pushing myself and suffering like a dog but it's not an end all for me.  I can have the shittiest day, go for a ride and be reminded that the bicycle is an amazing thing. It can wash away all the anger, all the frustration, sadness, confusion, it truly is a pretty amazing thing, riding a bike.

That being said, I haven't ridden my bike once this week. Ha. I know, WTF! The term "rest week" is a foreign concept to me. Honestly, I'm not a fan. It's tough for me to not ride but I feel tired, burnt out a bit if you will. I've pinned eight numbers to my jersey in 4 weeks. This past weekend I could tell my body was trying to tell me something. Give me a break dude! Alright, fine, big baby.

I'm already itching to get back to riding again. This time off has hopefully done some good. If I can take just three days off the bike and be dying to get back on it, thats a good sign. I know both my mind and my body will be ready.

I've got some exciting things to look forward to and jump start me back in. What better way to get the legs going again than a nice 65mile jaunt in southern NC, northern SC. On Saturday I'm pretty excited to be riding The Good Ride an event benefitting The 24 Hours of Booty. Both are amazing charities that raise money for cancer research. Something that hits close to home for me.

Posted by this Hoffen: McNasty on Wednesday, May 07, 2014 No comments:

This about sums it up. 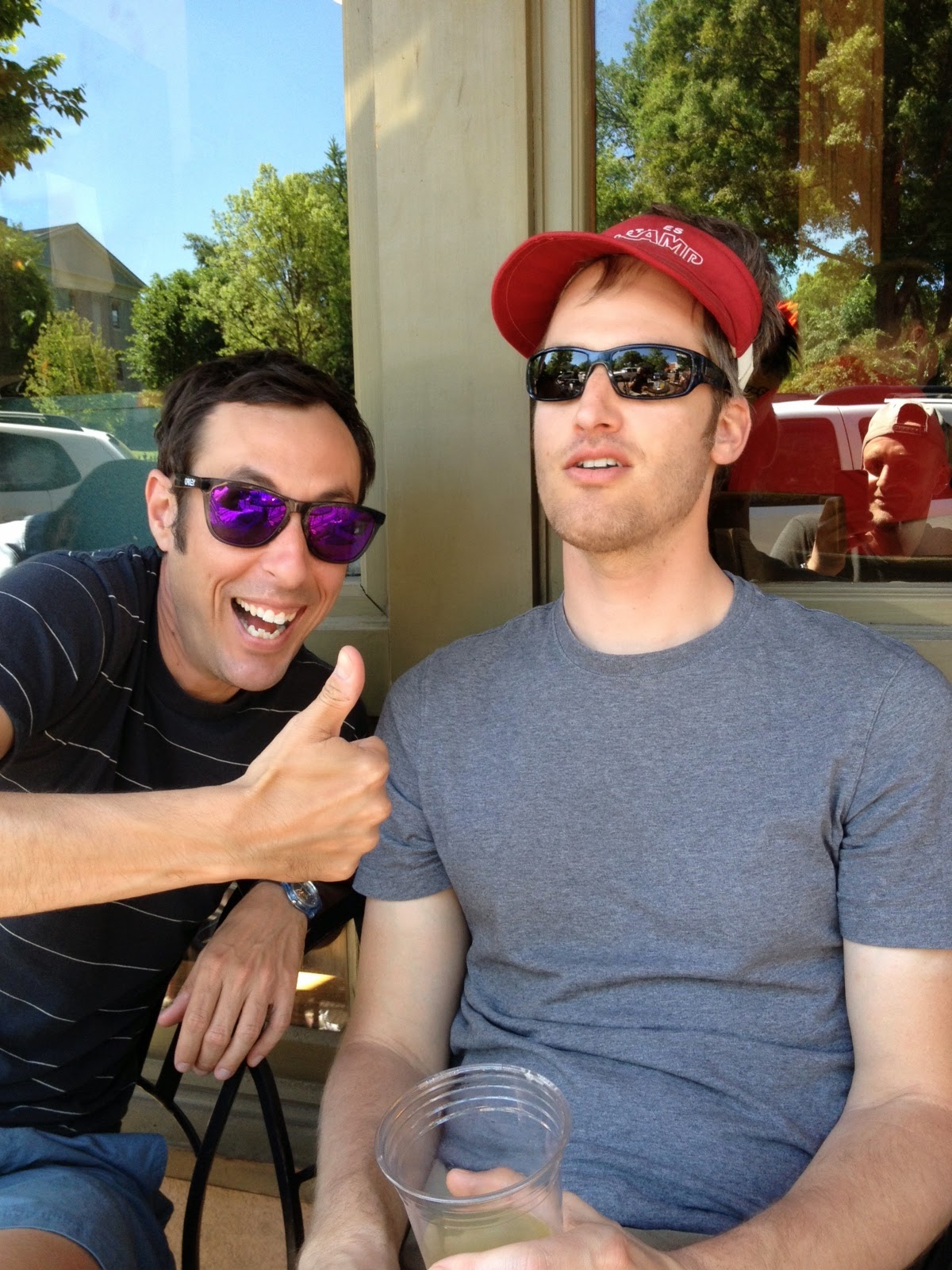 Posted by this Hoffen: Spankye on Wednesday, April 30, 2014 No comments:

I remember the first time I attempted the Athens Twilight races. The course was sketchy, it was full of big crashes and plenty of guys being complete dickheads. It was one of the final road races I competed in years ago and it left the taste of ass in my mouth for road racing. I never really looked back.

I told myself that this year that I would take every opportunity I could to race my bike and I wasn't going to let the past change that. Of course loosing my father has made me realize more than ever that life is short. Too short to let anything intimidate you. It seems a bit strange but because of that I've developed this odd sense of calm when it comes to racing. It's also the best place to loose myself and just let it all go.

The most frustrating thing for me when it comes to road racing is the fact that people seem to show up to these things and not want to race. Just sit in the pack, letting other people do all the work and go for it if they're still there. I'm sure I will never be able to do that. Thats probably why I fell in love with cyclocross, there really isn't any bullshit. Race hard. The whole time. Period.

That being said, it really does take it's toll being the one of the ones making the race hard. Especially on a circuit like the Twilight amateur course. Two long straights, one slightly uphill make it damn impossible to get away from the bunch. There are always a bunch of crashed here. I knew this. Going into the turns first was critical, obviously but coming out of those turns and having a second or several on the rest of the pack made it damn hard not to try to push the pace and get away, ultimately it paid it's toll. I stayed in the top 10ish for just about the entire race (as most racers plan on doing) but when it came down to the dash for the line, those lazy bastards just got the best of me. Thus is road racing. Psh. 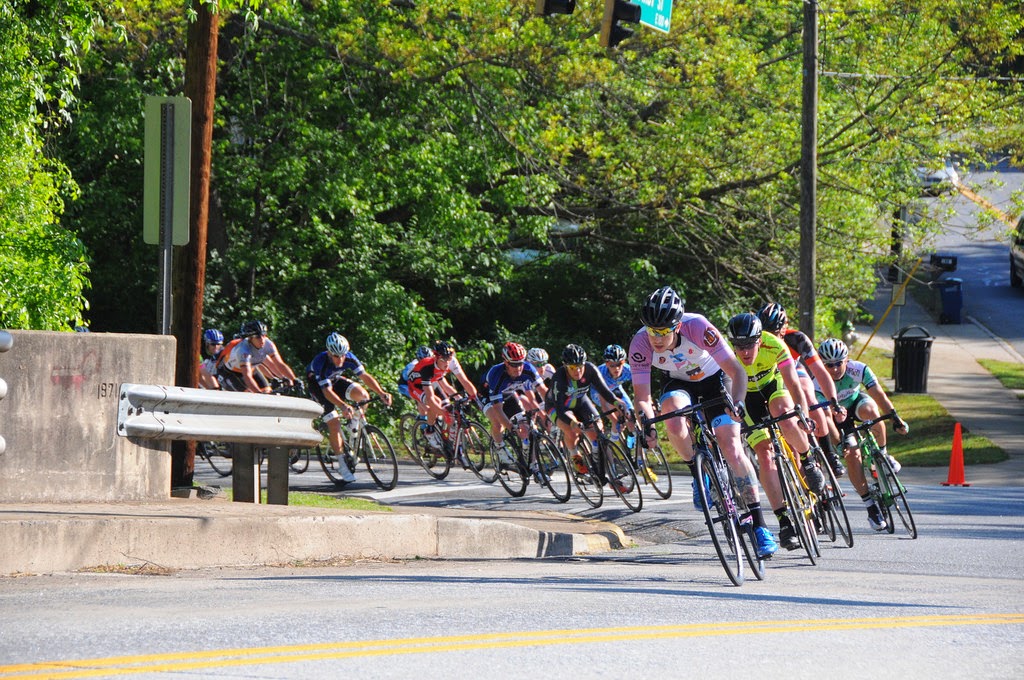 Now I was kind of down about letting lazy roadies get the best of me but at least I had delicious Taco Stand margaritas, not to mention great company, to look forward to so I was cool. I mentally checked out. Come to find out I ended up finishing 10th out of 57 preregistered (I would say maybe 70 toed the line? crashes, dnf's, etc...) and qualified for the Amateur Finals on the downtown Athens course. 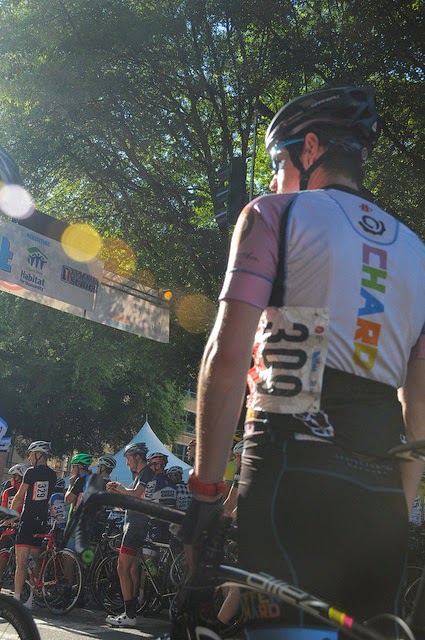 It was incredibly hard not to partake in mid day festivities. Luckily several fellow Hoffs took up the slack. Thanks guys, you know who you are. I went into the "finals" with zero expectations. It was just one of those things I could never pass on. Having already done an "amateur finals" race this year, the only goal I had was be happy with my performance. I spent the race, yo yoing off the back of the main group which contained just about every category of racer (I was definitely, on paper, the lowest on the totem pole) . After about 35 minutes of some of the hardest efforts I've ever done on a bike, I gave everything I had left to sprint it out for another placing that didn't matter.

120 people potentially qualified for the "finals". When I registered it definitely looked like everyone had signed up. There were plenty of crashes and from what I've been told there were on average five people being pulled from the race per lap. Out of the 72 listed finishers, I ended up 49th. 49 out of 120 of the fastest racers, i'll take that. Not like that number really matters. I was satisfied and happy. 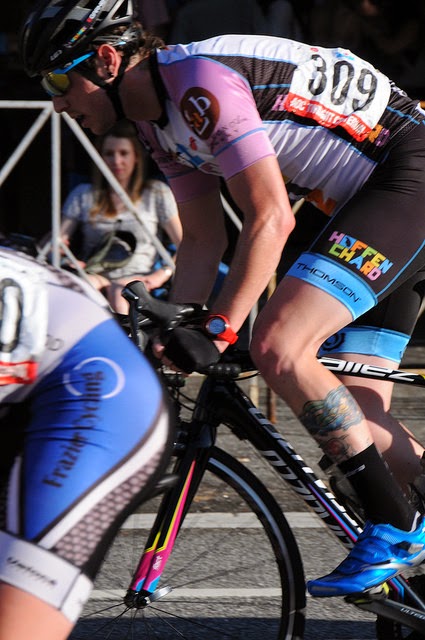 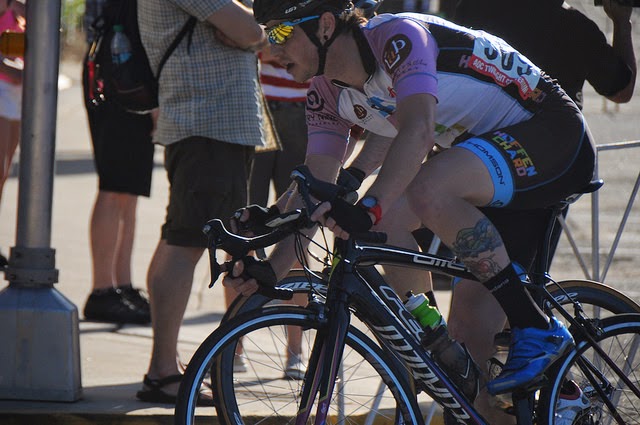 After some quick high fives with the closest, I ran back to the hotel for a quick shower and change before the pro races. I parked the bike unclipped the helmet and had a moment for myself. It only takes an instant for me these days to break down in tears. I was happy, I was proud and I was sad all in the same instance. I will forever have and emotional tie with my bike and my father and its something that will always make him feel close. 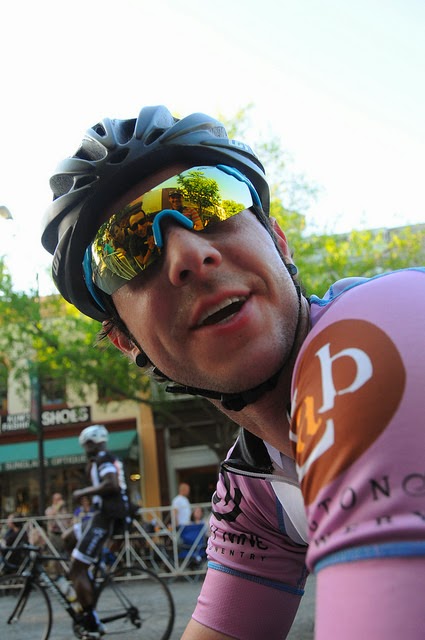 It was a good weekend! Thanks to everyone who screamed at the top of their lungs, held a front row starting spot (even though I wasn't there to take it), took photos, had drunken conversations that only I will remember, drank more than their share because I couldn't, gave hugs and high fives. #HoffLife
Posted by this Hoffen: McNasty on Monday, April 28, 2014 No comments: